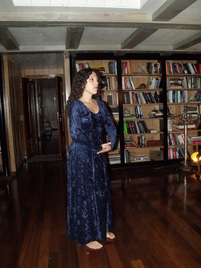 There is a woman alone,
On the beach, waiting
like a rock for the return of a seagull.

Seashore is a solo inspired by the work of visual artist Domenico Mazzilli from his exhibition 'Colours in motion'. www.domenicomazzilli.com

'Colours in Motion' two evenings of art and live performances 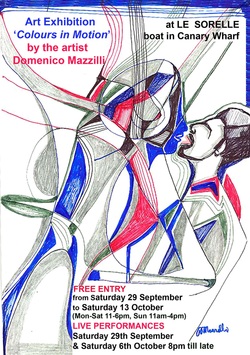 Following the latest publication of ‘Pensieri Colarati’ (‘Colourful Thoughts’) a collection of the artist’s thoughts and reflections, ‘Colours in Motion’ exhibits original illustrations from the book and a series of works
inspired by Mazzilli’s interest in capturing moments in time.

“Domenico’s work has an expressionistic informal plastic style that is rooted onto the human figure … his ability to extract what is real and turn it into an enlightening expressive vision.”
Michele Campione

“... There’s no doubt that Domenico Mazzilli unites the chosen material, be it plaster, marble, bronze, with the merciless excavation in the bowels of his characters, on their faces and on their bodies in which one may clearly read all that boils inside."
"Spazio Ovest"

PROGRAMME FOR LIVE PERFORMANCES ON 6th October -8PM'Seashore'
Choreographed and performed by Annarita Mazzilli
Music by Andy Higgs
There is a man alone,
On the beach,  waiting
like a rock for the return of a seagull.

Live music with Anna Scott an experimental cellist, vocalist and composer.
As a solo artist, Anna uses cello, voice and loops to create both set songs and improvised soundscapes.

Trained at Dartington College of Arts, she works both as a solo performer as well as a session player and composer for theatre, dance, film and tv.
Having worked with companies such as Theatre Alibi and La Strada Fashion Circus, she recently performed in ‘Love’s Labour’s Lost’ with Deafinitely Theatre at Shakespeare’s Globe, and co-composed the soundtrack for an Olympic documentary, aired earlier this year on BBC1. She has recently taken on a new role as musical director for the Hertfordshire based company Actability and is recording her debut album.
A long-time member of folk/punk band Mozzy Green, she has toured the UK and Europe with Underground Railroad and appeared on stage with artists including Imogen Heap, Blood Red Shoes and Silent League.


PROGRAMME FOR LIVE PERFORMANCES ON 29TH SEPTEMBER -8PM
'365 Times woman'
Choreographed and performed by Morena De Leonardis
It's the fire in her eyes,
it's the flash in her teeth,
the swing in her waist,
the joy in her feet.....
woman don't let her sadness to come out,
woman cry when lights go out....

'Seashore'
Choreographed and performed by Annarita Mazzilli
Music by Andy Higgs
There is a man alone,
On the beach,  waiting
like a rock for the return of a seagull.